A short history of provincial banking and a banknote from Nailsea, nr Bristol

An Act of Parliament of 1685 allowed post-horse roads to be used by the public, not just by people on Government business. This meant improved communications with London, and the relatively safe movement of gold, which had the effect of improving commerce throughout the country. There were a large number of prosperous provincial towns in England and Wales which were ready to take advantage of local banking. The first provincial, or country, bank was opened by Thomas Smith in Nottingham in 1688, and for more than 100 years the increase in country banking mirrored that of the post roads as more Turnpike Acts were passed.

In the period 1750-1793 there was a rapid expansion in industry, commerce and agriculture, giving rise to a huge increase in banking operations. At the end of this period there were about 400 bankers. However there were also high levels of bankruptcies due to the lack of credit worthiness in some of these new and developing businesses.

In 1793 France declared war on England. The resulting crisis brought down over 2,000 firms, including about 100 banks, and started a period of intense shortage of credit and currency. One result of this was the inauguration of the famous Bank of England £5 note. As the crisis continued, prices rose sharply – by 18% between 1794-5 – until the continuing export of gold, the fear of invasion, and the hoarding of cash led to such a depletion of the Bank of England’s reserves that it had to obtain the Bank Restriction Act in 1797 which allowed it to stop issuing cash in payment of notes. This was intended to last only from 3 May-24 June 1797, but in fact remained in force until 1821.

This Act was addressed to the Bank of England only. Other bankers were not affected and remained legally liable to redeem their notes in coin, despite the near impossibility of obtaining such gold and coin. In practice, bankers immediately responded by simply issuing Bank of England notes whenever their notes were presented for payment. This curious situation operated smoothly, and the freedom it afforded provincial banks, together with a shortage of the coin of the realm, gave the impetus for a large increase in their numbers from 300 in 1798 to over 700 by 1813. 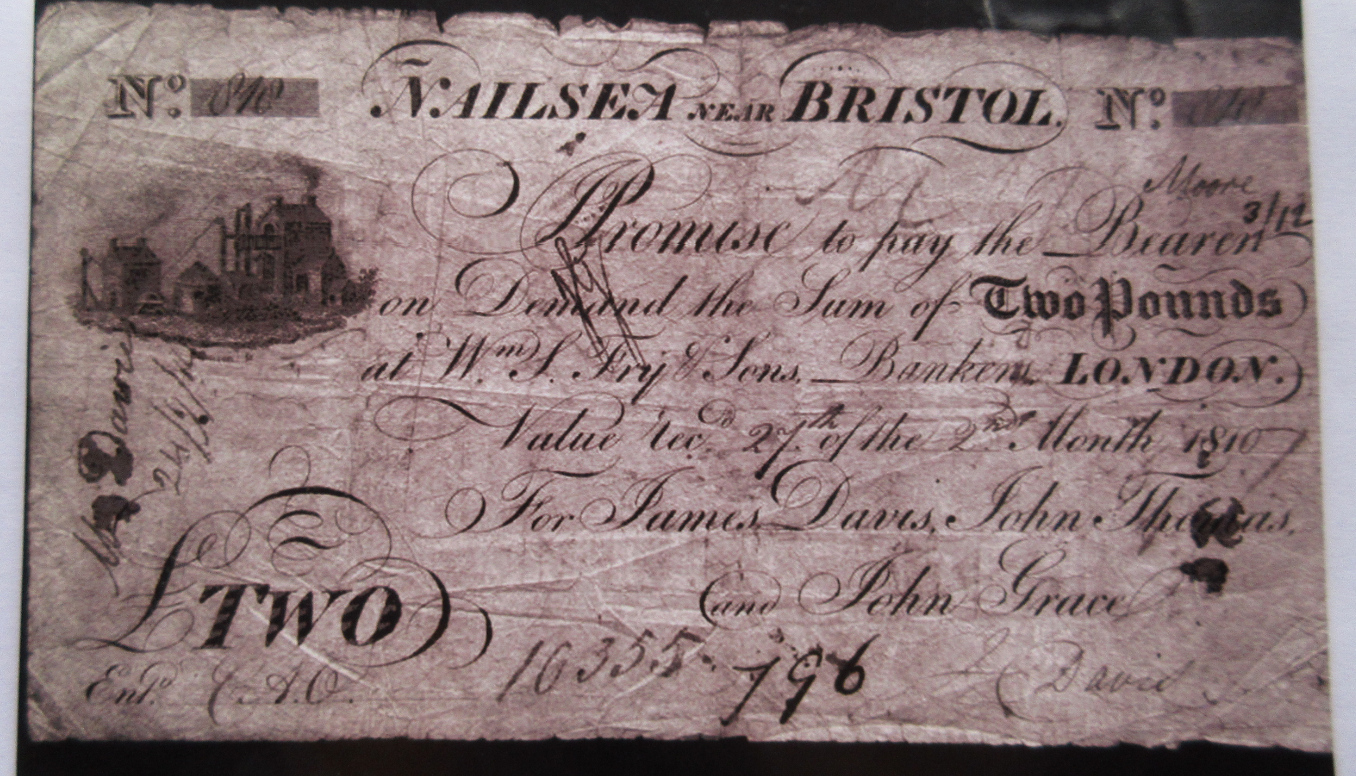 In 1797 the right for both the Bank of England and provincial bankers to issue £1 and £2 notes was created. However the temptation to over-issue them was great, which fuelled price increases. At their peak in 1809 wholesale prices were some 2.5 times their values in 1900.

£2 notes, like the one shown here, were issued by the Nailsea Bank to pay workers in both the glass and coal industries there. The first partners in 1810 were James Davies, John Thomas and John Grace. James Davies was one of the colliery proprietors at Nailsea, John Thomas became a Bristol councillor, and John Grace was described as “gentry” of Wellington Place, Stokecroft (sic). Another partnership was formed between John Robert Lucas, of Nailsea Glassworks, William Chance a JP for Birmingham, and William Coathope. Nailsea banknotes are extremely rare and command a high price in the market.

In 1825 the Castle Bank, Bristol, was cited in a petition to the House of Commons who declared that country banks ought to redeem their notes in cash or gold, and not Bank of England notes as formerly, so thereafter the number of banks started to decline. The era of provincial banking finally came to an end in 1953 when Gunner & Co of Bishops Waltham was taken over by Barclays Bank.

The Nailsea Banknote reads: No. 818 Nailsey near Bristol No. 818. “I promise to pay the Bearer on Demand the sum of Two Pounds at Wm S Fry & Sons, Bankers London. Value recd 27th of the 2nd Month 1810 for James Davis, John Thomas and John Grace” and on the left hand side, sideways on “Mr Davies 24/2/14”