DECIMAL DAY AND THE OLD COINAGE

Britain's "Decimal Day" occurred fifty years ago, on 15th February 1971; when decimal coins replaced the old pounds, shillings and pence coinage system. Earlier in 1968, the new 5 and 10 pence coins had been introduced to operate alongside the shilling and florin. In 1969, a seven-sided 50 pence coin had replaced the ten shilling note.

Finally, the rest of the decimal coins were circulated for use in 1971, these being the new halfpenny, penny, and twopence. Specimens of these had also been issued in 1968, but given a 1971 date; they were not legalised for spending until 1971.

The "old money" halfpenny was withdrawn from circulation on 31st July 1969; while the old ten-shilling paper note was finally withdrawn on 20th November 1970. Our halfcrown went out on 1st January 1970.

In 1982 the first 20 pence piece appeared, with its distinctive seven-sides; just like the 50 pence coin but smaller. In 1983 the first pound coin was seen. This was followed by a two-pound coin, which has proved popular with collectors of modern money due to the variety of designs.
However...there was one casualty of the new system within twelve years of Decimal Day. It was the little new halfpenny. Retailers tended to ignore it when pricing goods and shoppers were not always favourable towards it. The last halfpenny was minted in 1983 and it was demonetized at the end of the following year. 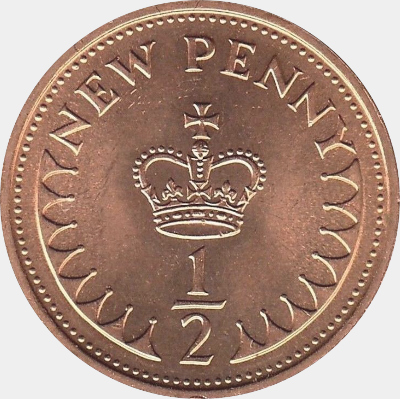 Younger generations will not have handled the "old money" in their daily lives and are most likely to encounter examples in junk tins, jars and bric-a-brac shops, the backs of drawers and cupboards in their parents' homes. The majority of these coins will be worn, grubby and scratched, but it is worth sorting through them in the hope of finding a few in half-decent condition. They are, on the whole, not especially valuable; but some dates are a little scarcer than others, for example the 1946 and 1949 threepences; pennies may carry mint-marks for Heaton and Kings Norton; and old pre-1920 coins had higher silver content. Cupro-nickel finally replaced silver content after 1947, because the silver bullion was needed to pay back that which was loaned by the U.S.A during wartime.

Coins with lustre and finely etched clean details may be worth putting aside in a coin cabinet or special collectors' envelope...not because they are worth a fortune but because it will help keep them clean and free from too many fingerprints.

We take a look at some examples:

A little coin that was last minted in 1956 and demonetized in 1960 bringing to an end its extremely long history. In keeping with its small size, the coin featured a wren during its latter years. The farthing did not feature in the calculations for conversion to decimal coinage. 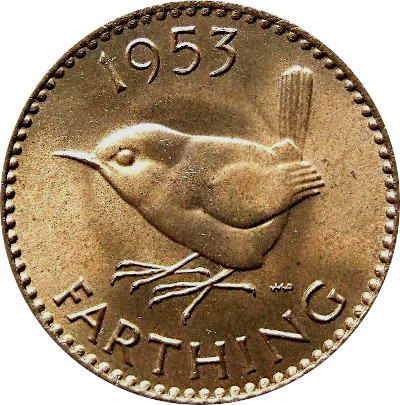 Casual collections will most likely have a mix of Victorian, Edward VII and on through to Elizabeth II. Reverses show Britannia until the reign of George VI, when the ship "Golden Hind" was used. 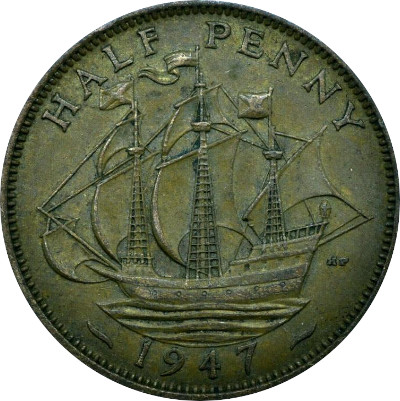 Much like the halfpenny, but larger; and Britannia is displayed on the reverses. 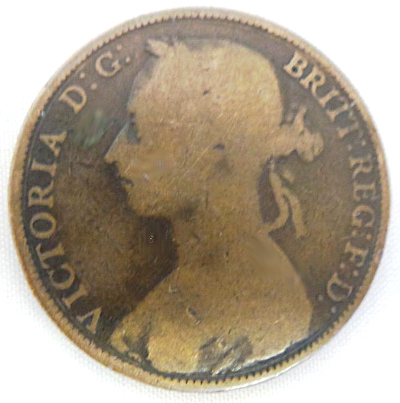 
It is worth noting that the bronze coins of George V and Edward VII have a low-relief portrait, which means that the coins are often very worn down and details can be faint to non-existent, especially on the head and facial features. Victorian coinage offers more variety with respect to the Queen's head, which begins with a "young" portrait, moving through to the "bun" head and then to the "veiled" portrait as she reached old age. Many of these will be very dark-toned and worn, some are often nearly blank.

Of notable interest are those pennies that were struck by Kings Norton Metal Company. During George V's reign, the Royal Mint ran short of capacity to mint pennies and contracted work out to Kings Norton. These pennies were struck only in 1918 and 1919, bearing the initials KN on the reverse side, down by the date and to the left side.

Of interest also is an "H" mintmark, representing Ralph Heaton's Birmingham Mint Ltd; this mark appears on pennies of 1912, 1918 and 1919. The same mintmark also appears on some Victorian pennies.
In both cases, collectors have made great efforts to gather these coins out of circulation before the old penny was withdrawn. 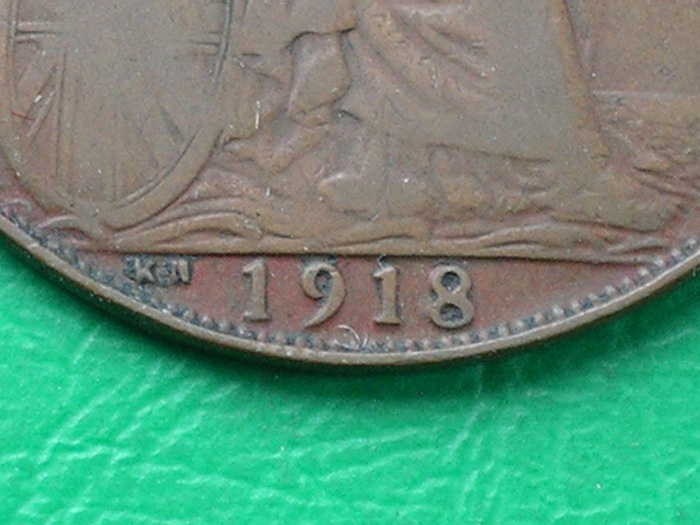 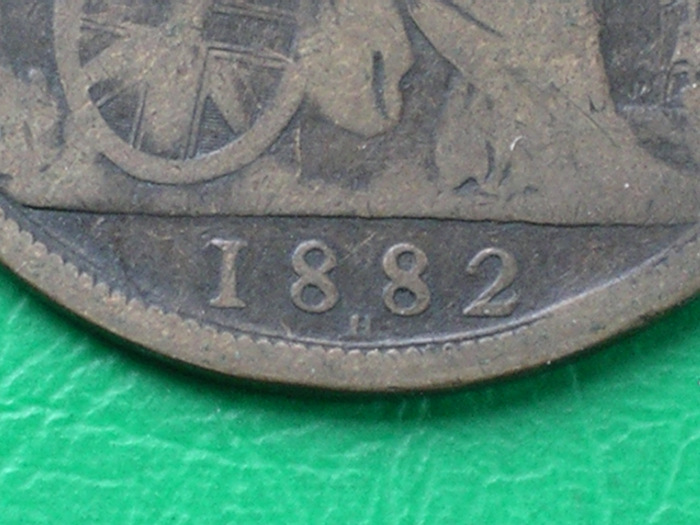 The reign of George VI shows the penny with IND IMP in the obverse legend, but the second issue of 1949 onwards omits these two abbreviations as India became independent. IND IMP (India Imperator) was used on British and British Empire/Commonwealth coins from around 1893, when India became part of the British Empire; until 1948.

12 pennies made one shilling
240 pennies to the pound

This coin was very distinctive, with its twelve sides and brassy colour. The reverse showed either a portcullis (under Elizabeth II) or the thrift flower (George VI). Often called the "thruppeny bit". There were 4 of these to one shilling and 80 of them to the pound. 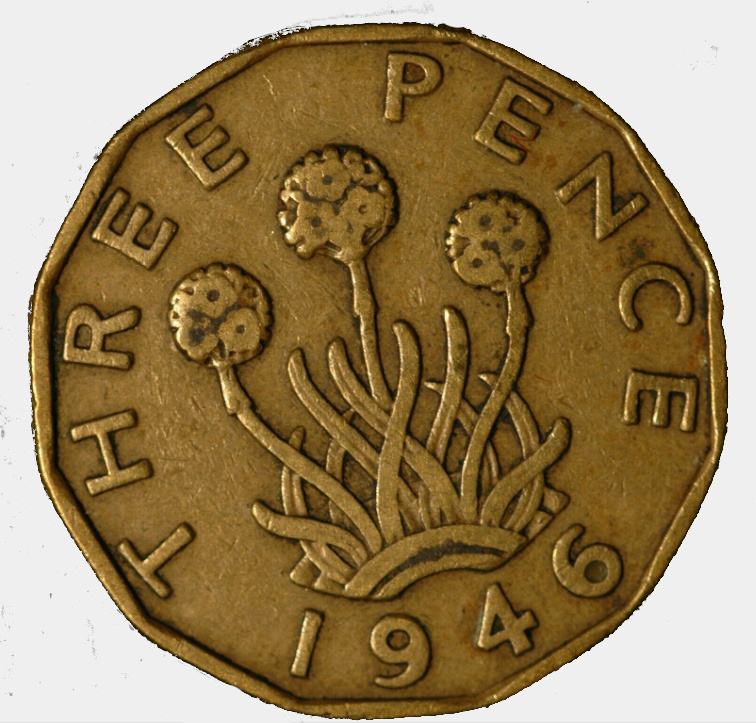 This coin preceded the twelve-sided type and was replaced by it in 1942, with final minting being in 1944. Often confused with the sixpence coin, it was slightly smaller. It also earned itself the nickname of "Joey". 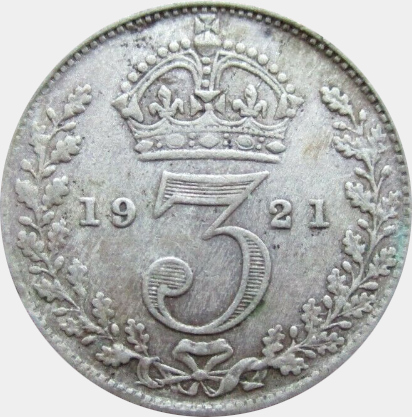 A small silver coin (later to be cupro-nickel metal); widely referred to as a "tanner". This nickname is thought be derived from a Romany gypsy word "tawno" which means "little one". 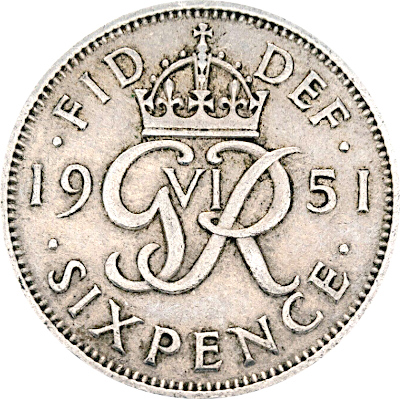 2 sixpences made one shilling
There were 40 sixpences to the "old" pound.

Written as 1/- or sometimes 1s (and even 1s 0d, denoting 1 shilling and zero pence). Like some other coins, it acquired a nickname, this being "bob" and multiples of shillings were regularly referred to as two, three or four bob (or more). The Boy Scouts' Bob-A-Job week derives its name from this. 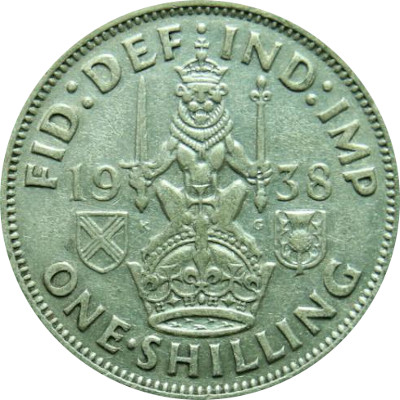 20 of these to the "old" pound. The reverse designs were particularly attractive, featuring a shield or shields within a garter during Victorias's reign; and later on, a lion standing on a crown. Shilling designs for England and Scotland were introduced during George VI's reign; the Scottish one including a thistle and shield of St Andrew alongside the seated lion.


The Florin or Two Shilling Piece:

10 florins made one pound

A much loved coin, 8 of these totalled up to an "old" pound. The half crown value was two shillings and sixpence, written as 2/6, or 2s 6d. 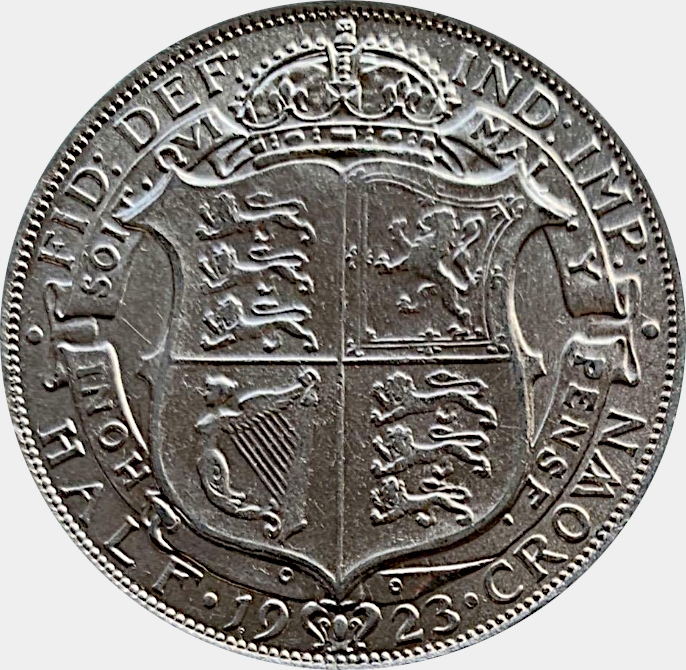 The remaining currency was in paper format; ten shilling note, pound note, five pound note, etc. Of these, the ten shilling note has now gone, replaced by the 50p coin. The first decimal pound coins were introduced in 1983 and were round in shape; they circulated alongside the paper £1 note until the latter was withdrawn in 1988. Other things that collectors may like to look out for are the decimal coins sets and the "farewell" sets, as shown below: 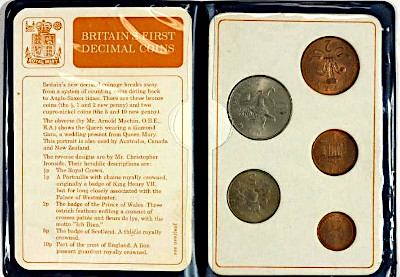 UPDATE: We've had some feedback on this article, offering extra details, so they have been included here. The old sixpence continued for some while in circulation, as two and a half new pence. The florin and shilling remained valid currency (10p and 5p equivalents) until the decimal coins were reduced in size; they (florin, shilling and larger decimal) were then demonetized in the 1990s. The size of the 50p coin was also reduced in 1997.
The pre-decimal silver coins 1920-1947 contained 50% silver and thus have an above-face value (likewise for pre-1920 silver).
The silver 3d remained in circulation well after the introduction of the twelve-sided 3d, particularly in Scotland, and they could be found in change, into the 1950s.