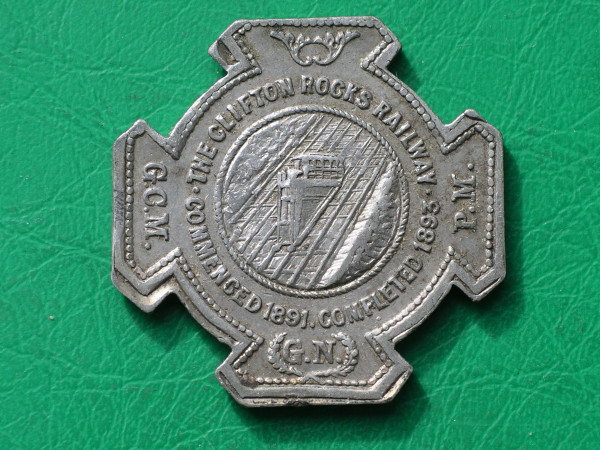 As recorded on this medallion, the Clifton Rocks Railway was officially opened on 11 March 1893. In the C19 Clifton was the most affluent, fashionable and desirable suburb of Bristol, home to many of the city’s wealthiest residents, with their grand houses and elegant terraces set among desirable green spaces. It also commanded the lofty heights above the Avon Gorge, offered stunning long distance views over the neighbouring county of Somerset, and was accessible from the port of Bristol below only through steep and winding roads and lanes.

As the port was a bustling working site, with the added charms of sailors at leisure and fetid river conditions, most of Clifton’s residents were content with this happy separation of their respective areas.

However, towards the end of the century the potential benefits of a convenient link to the area below became more apparent, as it would provide Clifton’s residents with access to Bristol’s developing public transport system (rail and trams) as well as leisure cruises along the coast.

An application to build an inclined tramway in 1880 was rejected by the Society of Merchant Venturers (the powerful owners of much of Bristol’s land), probably because it would have created an eyesore. However, a subsequent proposal for a funicular railway which could be hidden by drilling a tunnel through the limestone cliff side was approved in 1890. The site was adjacent to Brunel’s suspension bridge.

Commencing in 1891, it took two years to build, and upon completion it comprised four cabins (two pairs, one of each being First Class) running on tracks between an upper and a lower station. They were powered by gravity, as water was pumped into tanks beneath the cabins at the top station of the incline and then emptied out at the bottom station. Using a pulley system the weight of the water beneath the top cabins was then sufficient to lift the lighter (empty tank) cabins from below. The direct vertical height between the top and bottom was approximately 200 feet, but with a gradient of about 45%, the actual inclined track length was around 450 feet. The width of the tunnel was 28 feet. With a grand opening on 11 March 1893, the railway carried 6,220 passengers on its first day, leading to 427,492 passengers in its first year.

Evidently the novelty began to wear off. Passenger numbers declined and the Clifton Rocks Railway Co. Ltd was also damaged by legal problems. It went into receivership in 1908. The railway was acquired by the Bristol Tramway and Carriage Co but was never able to recover its popularity, and surrounding infrastructure changes, particularly a wider new road and a railway closure in the Avon Gorge, sealed its fate. The Clifton Rocks Railway finally closed in 1934.

The tunnel was commandeered during WWII and was adapted for use by the BBC, also serving as an air raid shelter for local citizens.
There are recent plans to enhance the site as a tourist attraction, but there is no prospect of the railway being re-opened.

The commemorative medallion illustrated above is in fact best described as a ticket, as it was issued to each of the 6,220 first day travellers. In addition to a depiction of the railway, it bears the initials of the promotor, George Newnes M.P., the engineer, G.Croydon Marks, and the architect, Philip Monroe & Sons. Some, but probably not all, of these tickets were originally gilt, the most likely explanation being that the gilt tickets were for the First Class passengers.